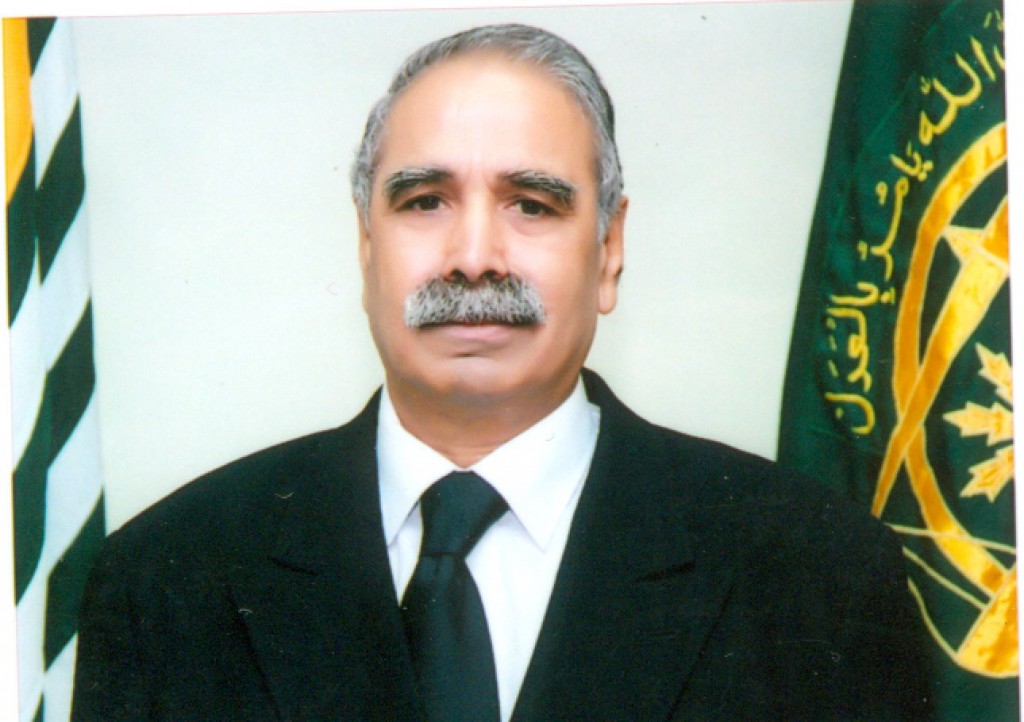 
Mr. Justice Mohammad Azam Khan former Chief Justice of Azad Jammu & Kashmir was born in village Kalyal Bainsi, District Mirpur on 25th February 1952. He got his primary education from his village school and passed secondary school examination from Govt. High School Potha Bainsi Mirpur in 1967 and his intermediate examination in 1971 from Govt. Degree College Mirpur. Did his graduation from Punjab University Lahore in 1974 and L.L.B from Punjab University Law College Lahore in 1977. He started his practice as a pleader in lower courts at Mirpur in December 1977. He was enrolled as an Advocate of the High Court in January 1981 and as an Advocate of Supreme Court of AJ&K in June 1983. He was appointed as Additional Advocate General in March 1991.
He actively participated in Bar politics and was elected as Additional Secretary Mirpur Bar Association in 1978, Secretary General District Bar Association Mirpur in 1986-87 and was elected unopposed President of District Bar Association Mirpur in 1996-97. In 1997 he was elected as member of the first AJ&K Bar Council, remained member of the enrolment committee for Supreme Court of AJ&K, Kashmir Committee and Rules Committee of AJ&K Bar Council.
He was appointed as Ad-hoc Judge of the Supreme Court of AJ&K on 23rd June 2008 and permanent Judge of Supreme Court of AJ&K on 30th June 2010. He took oath of his office as Acting Chief Justice of AJ&K on 16.05.2011 and as Chief Justice of AJ&K on 25.06.2011. He retied on superannuation on 24.02.2017.
In his tenure as Chief Justice, a Memorandum of Understanding (MoU) was signed on 7th September 2013, between the Judiciary of Pakistan and Judiciary of AJ&K. Mr. Mohammad Azam Khan attended meetings of the National Judicial Policy Making Committee in Pakistan as an observer and paved way for the visits of Hon’ble Chief Justice and Judges of Superior Judiciary of Pakistan to Azad Jammu & Kashmir in 2013 and 2016.
In his tenure as Chief Justice he contributed towards infrastructure development and provision of accommodation for judiciary, including the retrofitting of Supreme Court building at Muzaffarabad, construction of the judicial complex at Rawalakot, Supreme Court Rest House Mirpur, face lifting and new judicial block of Supreme Court building at Mirpur. The automation of Judicial System and connectivity of Supreme Court offices was also initiated in his tenure as Chief Justice AJ&K. The AJ&K Supreme Court Rules 1978 and
Supreme Court Employees Service Rules 2016 were also amended up-to-date during his tenure. He retired on superannuation on 24th February 2017 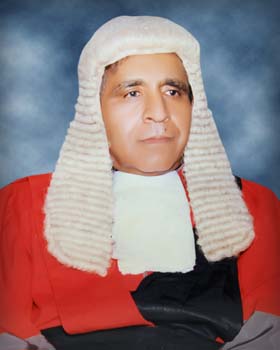 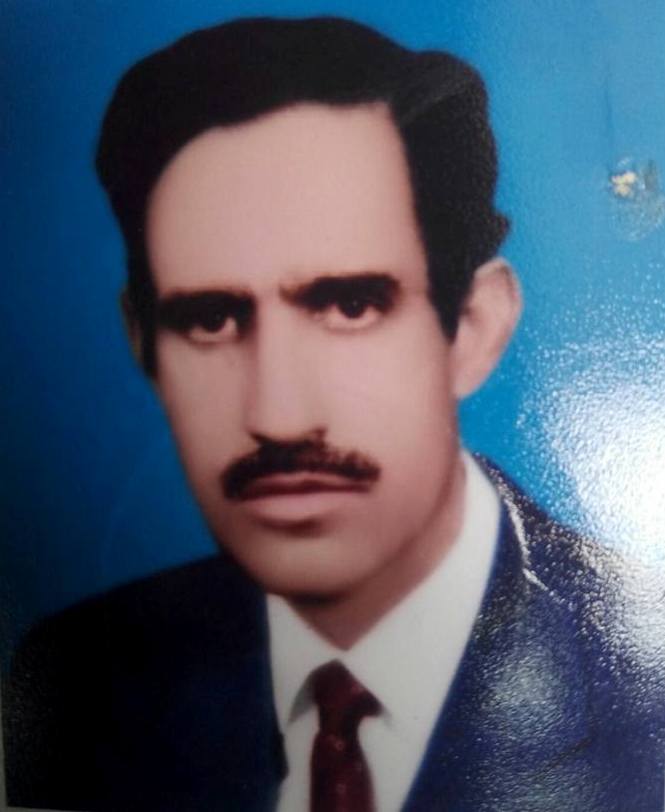 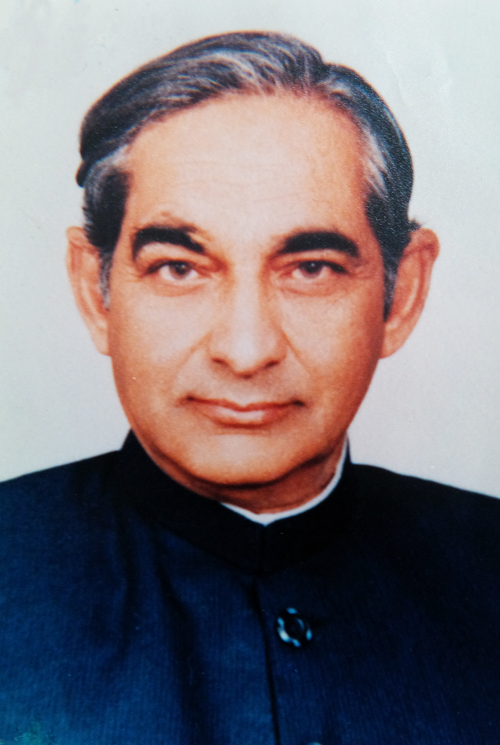 
Mr. Justice (Rtd.) Basharat Ahmed Sheikh was born on 29th November, 1935 in Jammu (Indian held Jammu & Kashmir) in a well-known political family. His grand-father Mistri Yaqoob Ali was one of six leaders who were arrested in 1931. In 1947, his family migrated from Indian held Jammu & Kashmir to Azad Jammu & Kashmir.
He passed his Matriculation examination from Muzaffarabad in 1952 and earned his B.A. Degree from the Gordon College, Rawalpindi in 1956, where he remained President of the Bar Literary Club. He completed his LLB from the University of Peshawar in 1960 and was enrolled as a Pleader on 10.9.1960. He started his law practice at Rawalpindi and was elected as the Secretary of the Rawalpindi Bar Association in year 1962. In 1967, he moved to Lahore and practiced in the Lahore High Court. During this period, he actively participated in Azad Jammu and Kashmir politics.
In 1971, he was appointed Advisor to Sardar Muhammad Abdul Qayyum Khan, the first elected President of AJ&K. He left his political assignment in 1972 and resumed law practice at Mirpur. From 1975 to 1978 he remained Advocate-General in the Governments of Sardar Muhammad Abdul Qayyum Khan, Khan Abdul Hamid Khan and Brig. (Rtd.) Muhammad Hayat Khan. He was elected as the President of Mirpur Bar Association in 1988.
On 28.1.1989, he was elevated to the Supreme Court as an ad-hoc Judge. He was appointed as Judge of the AJ&K High Court in 1990 (but he was asked to continue functioning in the Supreme Court). On 21st April 1994, he was appointed as the permanent Judge of the Supreme Court of AJ&K. He retired on 29th November, 2000, after completing about 12 years in the Supreme Court. His lordship played major role in the construction of present buildings of the Supreme Court at Muzaffarabad and Mirpur.
After his retirement, he served as Chairman Ehtesab Bureau for two years and also performed additional functions as Ombudsman for about a year. 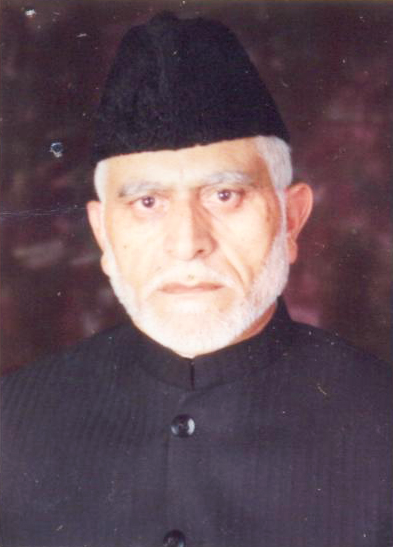 
Mr. Justice (Rtd.) Syed Manzoor Hussain Gillani was born in village Kandi Karnah District Kupwara (I.H.K.) on June 7, 1945. After school education, graduated from Jammu and Kashmir University, Srinagar in 1968. Obtained Law Degree in 1970 from Aligarh Muslim University, Aligarh. Practiced law in Srinagar up to 1976. Migrated to Azad Jammu and Kashmir in the same year along with his family.

He was enrolled as an Advocate of the Azad Jammu and Kashmir High Court in September, 1977 and as Advocate of the Supreme Court of AJ&K in 1979. Served as Legal Adviser to Custodian and Rehabilitation Departments and as an Adviser to Muslim Commercial Bank from 1979 to 1986. Elected Chairman Zakat Committee in 1979, Member of the Muzaffarabad Municipal Corporation and Chairman of the Legal Committee of the Corporation in 1983. He was appointed as Advocate-General for AJ&K in March 1986 and resigned from office in March, 1990.
He was elevated as permanent Judge of the High Court of AJ&K on May 05, 1991 and appointed as the Chief Justice of the High Court of AJ&K on May 03, 2001. He was elevated as permanent Judge of the Supreme Court of AJ&K on 20.8.2004. Acted as Vice-Chancellor, University of AJ&K and Chief Election Commissioner of AJ&K. He was retired as the Acting Chief Justice of Azad Jammu and Kashmir on 11.5.2010. His lordship is the author of five Books titled: -
1 “Constitutional Development in AJ&K”,
2. “Administration of Justice in AJ&K.”,
3. "The Constitution of AJ&K in the historical backdrop corresponding with Pakistan, India & Occupied Jammu and Kashmir Constitutions.”
4. A Book in Urdu titled "Rozan-e-Khayal Se".
5. Meezan-e-Zeest (His autobiography)
His columns on variety of subjects are published by Urdu & English National News Papers. He is considered as expert on the History of Kashmir and Issue and is called for lectures and opinion by different Universities, Think Tanks and Administrative Staff Colleges of Pakistan.
Currently is a Member of the Council of Islamic ideology of Pakistan. He is also Chairman of the Association for the Rights of the People of Jammu and Kashmir, (ARJK), a Think Tank.